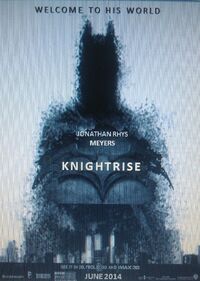 Knightrise (or Batman: Knightrise) is a 2014 American superhero film that is based on the DC superhero Batman. The film is a reboot to Nolan’s The Dark Knight trilogy . The film is directed by Duncan Jones. It is written by Jones and Michael Arndt; Christopher Nolan and Jonathan Nolan came aboard for creative input. Christopher, his wife Emma Thomas, and Jones are all producers. The film is part of the TalixArt's DCCU. It will serve as the prequel to 2016’s World's Finest (Which Batman will team up with Superman).

With crime reaching an all time high in Gotham City, the few that are incorruptible are trying to stop the ones that are corrupted. And one of the incorruptible is the Waynes, however just as if Gotham can be saved. Thomas and Martha soon fall prey to the rising Criminal Underworld. Their young son—Gotham’s last hope—Bruce Wayne almost joined them in death, but a mysterious figure saves him. Driven with vengeance, Bruce is taken away outside Gotham so he could learn skills of the dark arts. Seventeen years later, Bruce returns to see the city still ravaged and now the city is in even more danger when a bomber who uses riddles as triggers puts everyone in fear. Bruce decides in order to fight fear, he must use fear as a weapon to fight the underworld. To do so, Bruce must become a symbol…a Dark Knight…a Caped Crusader…Batman.

The film begins with a view of Gotham City in 2014. Shift to a abandoned building which suddenly explodes. Then a figure is blasted out of the explosion. The figure laying unconscious is Bruce Wayne. As he is out cold, we are taken back seventeen years in the past in 1997. A eight year old version of Bruce is playing an Game Boy while Alfred is helping Mrs. Martha Wayne display expensive dishware. A minute later, Thomas Wayne enters while talking over the phone. As he talks, Thomas insults the person on the other side which is Lew Moxon. Thomas hangs up and look over to see his son playing around and not studying. Upset, Thomas tells Bruce to read his book and ponder if he has time to finish that project for school. Sad, Bruce turns off the handheld and starts reading the book. Martha tries reasoning with Thomas not to make it so hard on their son; Thomas talks to her alone and tells her he is so riled up because of a failed deal and that Moxon wanted to outplay Wayne Industries. While the parents discuss, Alfred tells Master Bruce that he will hold on to his Game Boy and give it back once he finished reading; he then pats Bruce on the head and continues working. Bruce smirks while still reading.

Hours later, the Waynes is hosting a elaborate party with Wayne Industries execs and investors as guests. Young Bruce is stuck upstairs, yet fake sleeping as he sneaks to see what is going on downstairs. Thomas, Martha, and their friends--with some including Lucius Fox--are having a good time while Alfred serves appetizers. However, Moxon and a group of his men crash the party. Thomas goes at it with Moxon, yet Lucius and Martha tries to reason with him. Martha asks politely for Moxon to leave. Moxon does, but warns Thomas that he will pay for setting him up. As Moxon departs, a young Bruce is visibly shaken and is suddenly grabbed. Bruce almost make a noise, yet it is Alfred who takes him back to his room and pleas with him not to let his parents see him. Bruce wonders who is this Moxon; Alfred pleases Bruce by giving him back his Game Boy and he directs Bruce back to bed. Alfred tells him that everything will be fine. Bruce seeing his handheld, lays it by him as he sleeps. The next day, in Wayne Industries, Thomas is working on files as a as his secretary walks in telling Thomas that Daggert Corp called for a deal. Thomas refuses. Before then, the secretary reminds him not to forget his son's recital. Thomas looks at the time and realizes he is a hour late. Cuts to the gym, as Bruce's third grade class is having a recital and Bruce freaks out as he sees a bat flying in the roof. The teacher eases him down. As the class begins their play, Bruce dressed up in his role sees his mother and Alfred in the audience, but not his father. Bruce upset tries to do his best. Then as go well, a accident happens when a bat flies towards Bruce's face and Bruce freaks out and falls off stage. Martha and Alfred are horrified; they rush as others try to help Bruce up. Bruce cries as he breaks his right arm. Bruce looks back up to see the bat continuing to fly; Bruce looks at it in disgust... Want more click here: full plot

Batmobile seen in Knightrise
Add a photo to this gallery

The Shadow Master
Add a photo to this gallery

Screenshot 6
Add a photo to this gallery

Batman: Knightrise -The Game is set for the PS4, Wii U, and Xbox One in early June 2014. Rocksteady Studios (developers of Batman: Arkham Asylum and Arkham City games) is the main developer for the tie-in game. In the game, the player gets to play as Batman. The game’s story follows events that happened during the film storyline. The game's bosses are the Riddler, Killer Croc, Prometheus, and Deathstroke. Lady Shiva can be a playable character once you complete the game the first time and restart all over again.

Hans Zimmer will compose the score. Elements of The Dark Knight theme can be heard for the Knightrise theme.

Knightrise received a lot of great reviews. Based on 274 reviews collected by Rotten Tomatoes, the film received an 89% approval rating from critics, with an average score of 8.0/10. Many critics love the interesting direction made by Jones and even some have compared it to Nolan's Batman Begins. Most of the critics love Meyers’ Bruce Wayne giving a more “fragile, broken persona”; Skarsgård’s dark portrayal of the Riddler was well received.

The film was a commercial success with nearly $745,941,078 dollars gross in the Box Office worldwide.

Retrieved from "https://dcmoviesfanon.fandom.com/wiki/Knightrise?oldid=7074"
Community content is available under CC-BY-SA unless otherwise noted.