Superman Lives is a 1998 American superhero film directed by Tim Burton and written by Kevin Smith.

Brainiac, a power-hungry, energy-absorbing android warlord from deep space, detects a Kryptonian energy vessel on Earth capable of giving him the ultimate power. He pinpoints it to a remote island off the coast of Metropolis. It turns out to be Lex Luthor's own private island, where he has scientists studying a crashed Kryptonian spacecraft discovered years before Superman first appeared on the scene in Metropolis. They finally manage to get the ship open by cutting through the strange exterior with a Kryptonian laser beam. Inside, they discover a dormant android body.

Meanwhile, Clark Kent is engaged to Lois Lane (who already knows he's secretly Superman), and Jimmy Olsen is set to be the best man at the wedding. However, as they are planning the wedding at Clark's apartment, a loud explosion is heard. Clark sneaks out of the room, confusing Jimmy, and he goes into the nearest phone booth to quickly change into his Superman costume. Superman arrives at the scene, and discovers that a gigantic skull-shaped spacecraft has landed. Brainiac comes out of the ship and demands the authorities bring him the Kryptonian vessel. They are all puzzled, but Superman, being Kryptonian, asks Brainiac what he's talking about. Brainiac says that he doesn't have time for this, and he attacks the crowd with metallic tendrils coming out of his wrists. Superman attacks Brainiac, but Brainiac shocks him with radioactive energy. Brainiac uses his super strength to throw Superman into a building.

Brainiac gets back into his ship and flies off into the sky. Lex Luthor sees this on the news, and realizes that the Kryptonian spacecraft he has might be the vessel Brainiac is after. Lex records a message for Brainiac and sends the transmission into space. Brainiac receives the transmission in his ship and lands down on Lex's island. Lex shows Brainiac the Kryptonian ship, and Brainiac scans it for the energy source he wants. However, the energy source is gone. 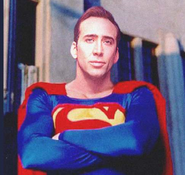 Jimmy Olsen
Add a photo to this gallery
Retrieved from "https://dcmoviesfanon.fandom.com/wiki/Superman_Lives_(1998_film)?oldid=14285"
Community content is available under CC-BY-SA unless otherwise noted.