Wonder Woman is the first film in the Community DCCU. It is based on the DC Comics character of the same name. It is directed by George Miller and written by Marc Andreyko. It stars Gina Carano, Charlie Hunnam, and Gerard Butler.

The Amazons are a tribe of warrior women living on the island of Themyscira. Their ruler is Hippolyta, whose daughter is Diana. No men are allowed on Themyscira, and the Amazons are not allowed to go out into the "men's world". As Ares is attacking Washington DC, air force pilot Steve Trevor flies into battle to defend his country. Trevor's ship is struck down by Ares, and he ends up crashing on Themyscira. He is taken to Hippolyta by the Amazon guards, and he explains what happened.

The Amazons hold a contest to see who can be the one to bring him back to America. Diana enters the competition, and ends up battling against the Amazon known as Nubia. She defeats Nubia, and is given the Wonder Woman battle armor, as well as the Lasso of Truth. Suddenly, a light shines down, and out of the sky, Hermes appears. Hermes tells the Amazons that Ares is attacking America, and they must stop him. Hermes gives Diana the magic powers of super strength and flight, and so Diana flies Trevor to Washington DC, which has been conquered by Ares and his armies.

Diana tells Steve to seek cover, even though he wants to help her. Diana heads to the White House to challenge Ares, resulting in a huge battle. However, Ares only seems to get stronger, and he defeats Diana. He is about to kill her, but changes his mind, and instead imprisons her. To her luck, Nubia comes to her rescue, saying that she couldn't just let her "sister" go alone. Diana and Nubia are attacked by guards, and fight them off. They escape the prison, and find a civilian family under attack by Ares's henchmen. After saving them, they decide to split up. Nubia goes to evacuate any civilians still in the area and Diana goes to find Steve Trevor, who she thinks can help. 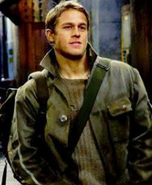 Steve Trevor
Add a photo to this gallery

Retrieved from "https://dcmoviesfanon.fandom.com/wiki/Wonder_Woman_(Community_DCCU)?oldid=14796"
Community content is available under CC-BY-SA unless otherwise noted.