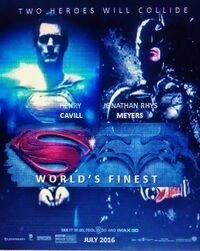 The film stars Henry Cavill reprising his role as Superman from Man of Steel and Jonathan Rhys Meyers reprising his role as Batman from Knightrise. Other cast includes Amy Adams, Timothy Olyphant, Benedict Cumberbatch, Jason Statham, Rachel McAdams, and Laurence Fishburne. The film will be out in July 2016 in 2D, 3D, and IMAX.

Two of the world's greatest heroes--the Man of Steel, Superman, and the Caped Crusader, Batman--are going to meet each other for the first time. When a old friend of Bruce Wayne shows up dead in Metropolis Bay, Superman tries to search for answers but comes across the Dark Knight when he decides to find his friend's murderer himself. As the two struggle to work together, both Superman and Batman will uncover a deeper conspiracy that connects Gotham and Metropolis than ever before and when Lex Luthor has his name stamped all over it, Lex decides to fight back and turn the heroes against one another seeing who the finest superhero is. Wanting to know more about Lex's scheme, Superman and Batman will have to work together to save the world or risk losing the trust of the public forever. 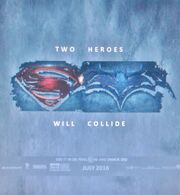 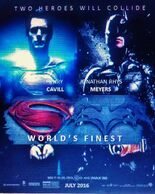 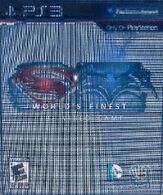 World's Finest: The Video Game cover art
Add a photo to this gallery

World's Finest: The Video Game is set for the PS4, PSVista, Wii U, 3DS, Xbox One, and PC in early July 2016. Rocksteady Studios (developers of Batman: Arkham Asylum and Arkham City games) is the main developer for the tie-in game. In World's Finest: The Video Game, the player gets to play as Superman and Batman in many levels. Lex Luthor, Deadshot, Solomon Grundy, Silver Banshee, The Joker, Amazo, and Bane are featured as the game's bosses.

Hans Zimmer will compose the score.

World's Finest received nearly universal acclaim. Based on 289 reviews collected by Rotten Tomatoes, the film received a 91% approval rating from critics, with an average score of 8.2/10. Metacritic had a score of 83, based on 40 reviews. CinemaScore polls reported that the average grade cinemagoers gave the film was "A" on an A+.

The film was a commercial success with nearly $895,941,078 dollars gross in the Box Office worldwide.

After the critical and commercially successful film, Warner Bros. confirmed there will be a sequel. Reeves hinted that a World's Finest sequel could have Superman and Batman teaming up with another major DC superhero. The studio confirmed the title, World's Finest: Cost of Justice. It will be out in July 2018.

Retrieved from "https://dcmoviesfanon.fandom.com/wiki/World%27s_Finest?oldid=7000"
Community content is available under CC-BY-SA unless otherwise noted.