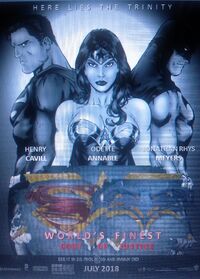 World's Finest: Cost of Justice (or World's Finest: Trinity) is a 2018 American superhero film that is somewhat based on the Batman/Superman/Wonder Woman Trinity' arc in World's Finest comic book. It features Superman and Batman teaming up again alongside Wonder Woman. It is the sequel to the 2016'S critical hit World's Finest. The film will feature a story element that will have key story points tie in to the upcoming Knightcoming; yet all will be leading up to The Justice League film in 2020.

The film is once again directed by Matt Reeves. It is written by Michael Arndt. Christopher Nolan, Nolan's wife Emma Thomas, Duncan Jones, Zack Snyder, and Reeves are all producers. The film is part of the TalixArt's DCCU.

The film stars Henry Cavill reprising his role as Superman from Man of Steel; Jonathan Rhys Meyers reprising his role as Batman from Knightrise. Odette Annable will play Wonder Woman. Amy Adams, Timothy Olyphant, Laurence Fishburne, and Gildart Jackson will all reprise their roles. Joining the cast will be Luke Evans, Paula Patton, Jared Harris, Christina Hendricks, and Peter Weller. The film will be out in July 2018 in 2D, 3D, and IMAX.

After the events of the first film, Luthor's plan is foiled and Superman and Batman have made the world a better place. However just after two years has passed since those events, the superhero duo are force to reunite once more when Lois gets kidnapped by a female warrior known as Magala. Superman and Batman combine forces to find Lois. And when they find her, they discover a hidden world in a beautiful paradise full of female warriors known as the Amazons of Themyscira. They soon meet Queen Hippolyta and her daughter, Diana who is also known as Wonder Woman. Just as if they can save Lois and leave, Diana seek Bruce's and Clark's help to stop an dangerous allegiance between the God of War, Ares, and an ancient sorceress, Morgana le Fey. Superman, Batman, and Wonder Woman will unite all of their skills and form an unprecedented trinity of power. However, is the trinity enough to stop Ares and Morgana? Will the trinity save the island and the world, no matter what there is always a cost...of justice.

Teaser screenshot
Add a photo to this gallery

World's Finest: The Trinity War is set for the PS4, PSVista, Wii U, 3DS, Xbox One, and PC in early July 2018. Rocksteady Studios returns as the main developer for the tie-in game. In The Trinity War, the game tells a what if scenario if the villains of the film attacked and control Themyscria. The game will feature more heroes and villains from the DC universe. Metropolis and Gotham City will return as main levels.

World's Finest: Cost of Justice received nearly universal acclaim. Based on 291 reviews collected by Rotten Tomatoes, the film received a 92% approval rating from critics, with an average score of 8.2/10.

The film's events is part of an overlarge story arch that will coincide to The Justice League which will be out in 2020.

Retrieved from "https://dcmoviesfanon.fandom.com/wiki/World%27s_Finest:_Cost_of_Justice?oldid=7271"
Community content is available under CC-BY-SA unless otherwise noted.